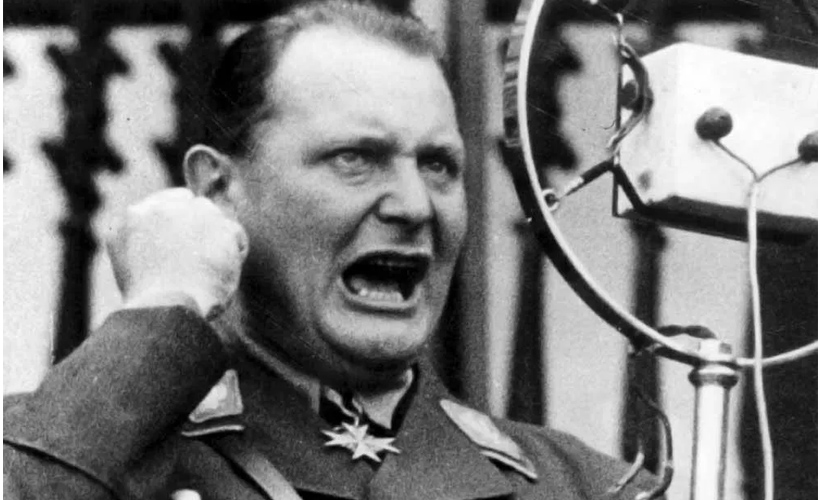 The people can always be brought to the bidding of the leaders...tell them they are being attacked, and denounce the peacemakers for lack of patriotism and exposing the country to danger.
Hermann Goring
Nuremberg Trials

The Center for Garden State Families would like to continue our investigative research into the Covid-19 Pandemic and a totalitarian vaccine that is now being forced on our society. Before we continue, our readers must understand that there are grave dangers when the Government creates partnerships with Corporate entities. These dangers can be seen in our history with the rise of Fascism. Benito Mussolini said, “Fascism should more appropriately be called Corporatism because it is a merger of state and corporate power.” The horrors of World War II saw this insidious merger of State and Corporate power culminate in the tragedy of the Holocaust.

As we read in our last article, IBM was deeply involved with the Nazi Regime to track Jews in Concentration Camps and chillingly catalog their tortured deaths. In addition, there was another company named I.G. Farben. I.G. Farben was a German Chemical and Pharmaceutical conglomerate. During the war, I.G. Farben used slave labor from concentration camps, including 30,000 people from Auschwitz. This company was also involved in medical experiments on individuals from both the Auschwitz and Mauthausen concentration camps. Lastly, one of I.G Farben’s subsidiaries manufactured the Zyklon B gas to exterminate over one million Jews in gas chambers during the Holocaust. At the end of 1945, our Allied forces seized the company, and in addition to the Nuremberg Trials, there was a subsequent trial called the I.G. Farben Trial. This led to 13 of the 23 directors of the company charged and convicted for war crimes.

We would now like to demonstrate with our research our own modern-day Fascist – I.G. Farben Pharmaceutical public-private partnership and the potential tragedy that is currently underway. Few know that on November 9th, 2015, the National Institute of Allergy and Infectious Diseases and the National Institutes of Health (NIAID) entered into a collaborative agreement with Moderna Therapuetics Inc. As a footnote to this article, we have acquired the Confidential Disclosure Agreement between NIAID and Moderna.[1] We have also included a report called The NIH Vaccine by Zain Rizvi from the Public Citizen organization discussing this partnership in further detail related to the patents on the mRNA technology. [2]

We have reviewed Moderna’s SEC Form S-1 Registration Statement from November 9th, 2018. This is the preliminary prospectus for a company embarking on an Initial Public Offering (IPO)[3]. Moderna announced an IPO price of $23 per share on Dec. 6, 2018. The next day, the company’s shares began trading on the NASDAQ stock exchange. An SEC Filing can reveal much about a company concerning its line of business, its financial position, and, more importantly, its risk factors. The following is found in their prospectus summary:

“We have assembled an exceptional team of approximately 680 employees and have established strategic alliances with leading biopharmaceutical companies, including AstraZeneca, Merck & Co., and Vertex Pharmaceuticals, as well as government-sponsored and private organizations, focused on global health initiatives, including Biomedical Advanced Research and Development Authority, or BARDA, Defense Advanced Research Projects Agency, or DARPA, and the Bill & Melinda Gates Foundation. As of September 30, 2018, we have raised over $2.6 billion in total funding from our strategic collaborators and investors, and have cash, cash equivalents, and investments of $1.2 billion. As we unlock the inherent advantages of mRNA, we aim to address as many diseases and impact as many patients as our technology, talent, and capital permit.”

Further into the SEC Filing, we review the potential risk factors disclosed to potential investors in Moderna, especially regarding its mRNA Technology. The following is a shortlist as it pertains to these risks:

Moderna also disclosed that “we have incurred significant losses since our inception and anticipate that we will continue to incur significant losses for the foreseeable future. We have incurred net losses in each year since our inception in 2009, including net losses of $216.2 million and $255.9 million for the years ended December 31, 2016, and 2017, respectively. As of December 31, 2017, we had an accumulated deficit of $621.9 million. As of September 30, 2018, we had an accumulated deficit of $865.2 million.”

Also, StatNews wrote an article on January 10th, 2017 called “Lavishly funded Moderna hits safety problems in bold bid to revolutionize medicine.” [4] According to Damian Garde, “Moderna Therapeutics, the most highly valued private company in biotech, has run into troubling safety problems with its most ambitious therapy, STAT has learned — and is now banking on a mysterious new technology to keep afloat its brash promise of reinventing modern medicine.” In addition, he also wrote in the same article that “three former employees and collaborators close to the process said Moderna was always toiling away on new delivery technologies in hopes of hitting on something safer than what it had. (Even CEO Bancel has acknowledged, in an interview with Forbes, that the delivery method used in Moderna’s first vaccines was not very good.)”

In Moderna, we have a profit-less company that did not have a single medicine approved and experienced troubling safety concerns. How fortunate for Moderna that we encountered a “life-threatening” pandemic allowing their investigational mRNA vaccine to be fast-tracked under an Emergency Use Authorization. We would like to point out that according to Moderna’s own SEC Filing, there had been no Phase 3 Clinical Trials yet on July 27th, 2020, it was announced that Phase 3 clinical trials of an investigational vaccine for COVID-19 began – Multi-site trial to test candidate developed by Moderna and NIH.[5]

We want to stress the language that is part of an Emergency Use Authorization. For this language, we used the document from the New Jersey Department of Health[6], which says the following: “Emergency Use Authorization is the legal authority of the FDA to authorize emergency use of an investigational medical product(e.g., vaccines prior to licensure, drugs prior to approval) or an unapproved use of an approved medical product to diagnose, treat, or prevent a serious or life-threatening disease. According to the FDA, an EUA is used to help make medical products available as quickly as possible by allowing unapproved medical products to reach patients in need when there are no adequate, FDA-approved and available alternatives. The known and potential benefits of the product, when used to diagnose, prevent, or treat the identified disease or condition, must outweigh the known and potential risks of the product to grant an EUA.”

As part of our investigation, we have obtained the FDA Briefing Document from Moderna dated December 17th, 2020.[7] Moderna conducted a clinical trial with approximately 30,000 participants in a one-to-one ratio. Fifteen thousand trial participants received the vaccine, and another 15,000 trial participants received the placebo. From their own FDA Briefing Document, Moderna stated that “they are evaluating the opportunity to amend the protocol to proactively re-consent participants who received placebo to be offered mRNA-1273 vaccination and to remain in the trial, enabling Moderna to continue to collect the relevant safety and effectiveness data over the entire two years of follow-up while increasing the likelihood of retaining participants on trial.” This essentially translates to the fact that there may not be a control group to cover up any adverse events and deaths.

One of the concerns many scientists and doctors have presented has to do with Antibody-Dependent Enhancement or Vaccine Enhanced Disease. This occurs when a vaccinated individual comes into contact with the live virus leading to a worsening of the disease, which the vaccine was designed to combat. From Moderna’s own FDA Briefing Document, they state the following: “Available data do not indicate a risk of vaccine-enhanced disease, and conversely suggest effectiveness against severe disease within the available follow-up period. However, risk of vaccine-enhanced disease over time, potentially associated with waning immunity, remains unknown and needs to be evaluated in ongoing clinical trials and in observational studies that could be conducted following authorization and/or licensure.” The very next day, on December 18th, 2020, the Osaka Paper[8] said the following “Here, we screened a series of anti-spike monoclonal antibodies from COVID-19 patients, and found that some of the antibodies against the N-terminal domain (NTD) dramatically enhanced the binding capacity of the spike protein to ACE2, and thus increased SARS-CoV2 infectivity.”

Also, on October 28, 2020, from PubMed.gov titled Informed consent disclosure to vaccine trial subjects of risk of COVID-19 vaccines worsening clinical disease [9] stated the following: “COVID-19 vaccines designed to elicit neutralising antibodies may sensitize vaccine recipients to more severe disease than if they were not vaccinated. Vaccines for SARS, MERS, and RSV have never been approved, and the data generated in the development and testing of these vaccines suggest a serious mechanistic concern: that vaccines designed empirically using the traditional approach (consisting of the unmodified or minimally modified coronavirus viral spike to elicit neutralising antibodies), be they composed of protein, viral vector, DNA or RNA and irrespective of delivery method, may worsen COVID-19 disease via antibody-dependent enhancement (ADE). This risk is sufficiently obscured in clinical trial protocols and consent forms for ongoing COVID-19 vaccine trials that adequate patient comprehension of this risk is unlikely to occur, obviating truly informed consent by subjects in these trials.” This short paper ended with the following: “Conclusions drawn from the study and clinical implications: The specific and significant COVID-19 risk of ADE should have been and should be prominently and independently disclosed to research subjects currently in vaccine trials, as well as those being recruited for the trials and future patients after vaccine approval, in order to meet the medical ethics standard of patient comprehension for informed consent.”

Although we have been referencing Moderna throughout this article, it is clear from the above that all pharmaceutical companies, including Johnson and Johnson, AstraZeneca, and Pfizer-BioNTech, which announced on November 9th, 2020that their mRNA vaccine was 90% effective, utilize methods that are considered to result in a severe reaction from Antibody-Dependent Enhancement (ADE). As of April 9th, 2021, the Vaccine Adverse Event Reporting System (VAERS) has reported 68,347 adverse events and 2,602 deaths. History has recorded another medical ethics issue involving the Government and Corporations coming together, resulting in the death of six million Jews. The world is now implementing a tyrannical mass vaccination program using experimental gene therapy with no long-term safety studies, including the near-term possibility of Antibody-Dependent Enhancement (ADE). Points Six and Seven of the Nuremberg Code [10] stipulate the following: “The degree of risk to be taken should never exceed that determined by the humanitarian importance of the problem to be solved by the experiment. Proper preparations should be made, and adequate facilities provided to protect the experimental subject against even remote possibilities of injury, disability, or death.” We are witnessing the most terrifying Government-sponsored clinical trial in pharmaceutical history, complete with total immunity from injury, disability, or death. For our readers who are paying attention, November 9th was highlighted in blue lest we forget.

November 9th, 1938, was when the Nazis launched Kristallnacht The Night of Broken Glass