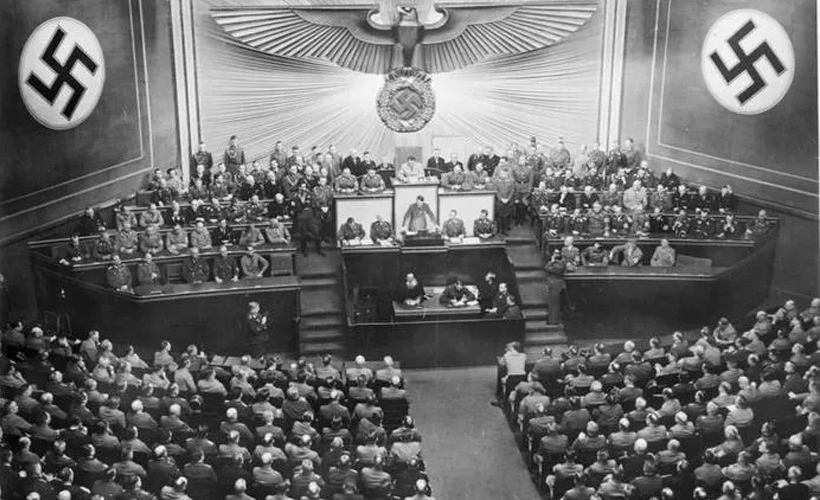 For tyrants, the lesson of the Reichstag fire is that one moment of shock enables an eternity of submission. For us, the lesson is that our natural fear and grief must not enable the destruction of our institutions.
Timothy Snyder
Author
I'm sure that Nero didn't set fire to Rome. It was the Christian-Bolsheviks who did that, just as the Commune set fire to Paris in 1871 and the Communists set fire to the Reichstag in 1933.
Adolf Hitler

The Center for Garden State Families would like to discuss The Enabling Act of 1933, which effectively ended the Weimar Republic of Germany and allowed Adolf Hitler to secure dictatorial powers leading to the atrocities of World War II. The Enabling Act was in response to a catalytic event. On the night of February 27th, 1933, the Reichstag Parliament Building in Berlin was set on fire. The Nazi Party under the tyrannical leadership of Adolf Hitler declared that the fire was the result of a Communist uprising – an insurrection against the Nation of Germany.

The German Police arrested Marinus Van Der Lubbe, a 24-year-old Dutch laborer who professed to have Communist leanings. Van Der Lubbe confessed to setting the fire and was later beheaded in January 1934. To this very day, many contend that Van Der Lubbe was a Nazi pawn. The Reichstag fire created a crisis that would instill fear in the masses that such an enemy, in this case, Communism, could destroy the Weimar Republic. The Nazi Party used the ensuing panic to its advantage. This singular event in Germany led to the passage of the Enabling Act on March 24th, 1933. This Act was an amendment to the Weimar Constitution that gave the German Cabinet or, more appropriately, Adolf Hitler the power to enact laws without the involvement of the Reichstag (the German Parliament). The burning down of the Reichstag building was the symbolic equivalent of burning down the Weimar Constitution and the entire legislative body of the German Parliament. The Enabling Act of 1933 was designed to “cleanse” Germany from corrupt and unwanted threats that were a temporary measure and only to be used when the occasion of these perceived threats arose. Adolf Hitler said the following regarding the Enabling Act, “The government will make use of these powers only insofar as they are essential for carrying out vitally necessary measures. The number of cases in which an internal necessity exists for having recourse to such a law is in itself a limited one.” There was nothing limited about the Enabling Act. Its very design was to purge the enemies of Adolf Hitler all because of the fear instilled in the masses by a fabricated enemy.

Few see the parallels to our own Reichstag Fire. On January 6th, 2021, a perceived right-wing mob forced their way into the Capitol Building in Washington, DC. One of the Capitol Police was killed after being hit in the head with a fire extinguisher. The Capitol Police also killed an “insurrectionist.” The next day the mainstream media began the systematic demonization of the perceived conservative enemies amongst us to squelch our civil liberties and, more specifically, our freedom of speech through censorship. It should be noted that on March 13th, 1933, the Nazis appointed Joseph Goebbels as Minister for Public Engagement and Propaganda. Goebbels became responsible for controlling the national media, film, theatre, arts, and other cultural aspects. Goebbels soon radicalized each area, ensuring that they advocated Nazi ideas. Joseph Goebbels said, “Think of the press as a great keyboard on which the government can play.” Eventually, this coordinated effort of fear-inducing propaganda led to the genocidal tragedy of the Holocaust.

America witnessed the Capitol building barricaded with fencing complete with razor wire. This act sent a message to all the citizenry of this nation. We, the people, were banned from entry to our Capitol. Few realize that Dictators manufacture perceived enemies through false flag events and hide behind barricades and fencing with razor wire. Dictators rule by Executive Order with absolutely no regard for legislative due process or constitutional restraints. Recent events demonstrate this concerning the divisive issue of vaccine mandates. On November 8th, 2021, Dictator Biden said businesses should proceed with vaccine mandates despite their pause decreed by the U.S. Court of Appeals for the Fifth Circuit. Our judiciary is being hijacked to continue a relentless assault on our civil liberties.

Dear Readers, Covid-19 and its mutations are the invisible enemies ENABLING the systematic removal of our freedoms and liberties. Our beloved Constitution is being dismantled in the name of Public Health and Safety. Like the Reichstag fire that burned down the German Parliament, our Constitution is being set ablaze. We must extinguish the flames of this Dictatorial Despotism that has taken hold of this nation lest we weep with ash-ridden tears and mourn what we have lost.

The only one who really knows about the Reichstag is I, because I set it on fire!.
Hermann Goring
Convicted Nazi War Criminal
Sign in Create an Account
Lost your password?