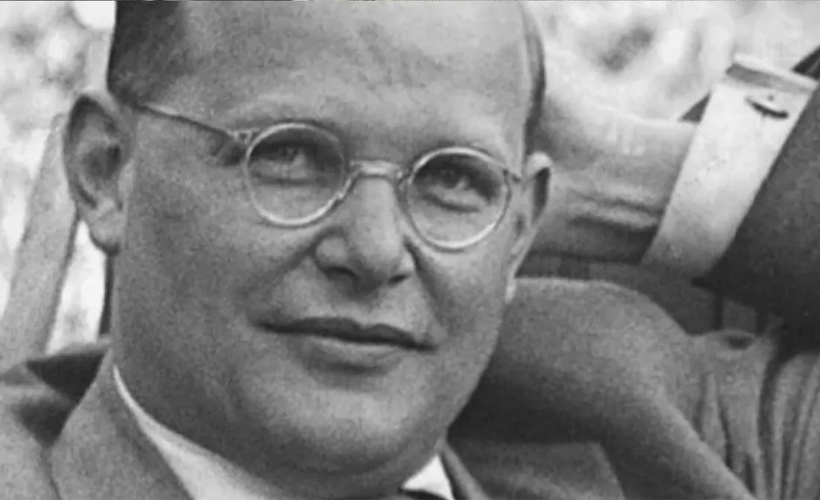 The fear of the Lord is the beginning of knowledge; fools despise wisdom and instruction.

The biblical saying, ‘The fear of the Lord is the beginning of knowledge, but fools despise wisdom and instruction’ says that the internal liberation of people for responsible life before God is the only real way to overcome stupidity.
Dietrich Bonhoeffer

The Center for Garden State Families will now discuss Dietrich Bonhoeffer’s Theory of Stupidity. Bonhoeffer was born on February 4th, 1906. He was a German Lutheran Pastor, Theologian and Anti-Nazi Dissident. He has been described as a man with a brilliant intellect and a loving heart. He was vehemently opposed to Hitler’s euthanasia program against the Jews.

Adolf Hitler rose to power on January 30th, 1933. Two days later, Dietrich Bonhoeffer delivered a radio address admonishing and attacking Hitler and warning the German people of the idolatrous cult of the Fuhrer. Midway through a sentence, Bonhoeffer was cut off the air to censor his voice. In the fall of 1933, a so-called “Aryan paragraph” was introduced in several of the regional churches controlled by the German Christians. It stipulated forced retirement when a pastor or church official had one Jewish grandparent. On September 5th, 1933, the Prussian general synod – commonly known as the “Brown Synod” since many German-Christian attendees appeared in brown uniforms –passed such a resolution, which other regional churches also copied. Many church leaders, including Bonhoeffer, protested the Aryan paragraph as a violation of Christian beliefs in the domain of the church of Christ. Dietrich Bonhoeffer was witnessing the German Church exchange the truth for a lie. They were exchanging the 1,000-year millennial reign of Christ for the 1,000-year reign of the Third Reich. They were exchanging the Cross of Christ for the Broken Cross of Adolf Hitler.

As part of the resistance, Dietrich Bonhoeffer was involved in a plot to assassinate Hitler. Much is written on Dietrich’s life, and the most comprehensive book is by Eric Metaxas called Bonhoeffer: Pastor, Martyr, Prophet, Spy. For this article, we focus on Bonhoeffer’s writings compiled in a book called Letters and Papers from Prison. Bonhoeffer was arrested in April of 1943. In October 1944, he was moved to the Gestapo prison in Berlin. In February 1945, he was taken to Buchenwald Concentration Camp and then to the Flossenburg Concentration Camp. Bonhoeffer witnessed mass psychosis on a grand scale. Mass psychosis is defined as an epidemic of madness that occurs when a large portion of society loses touch with reality and descends into delusions. Totalitarianism is a society built on delusions because tyrants are purveyors of propaganda-induced panic. This, in turn, induces fear and anxiety, leading to a psychotic break in society. What we call mass psychosis or collective hypnosis, Bonhoeffer called stupidity. The word stupidity is defined as behavior that shows a lack of good sense or judgment. As a result of mass media messaging, propaganda, and amygdala hijacking, an individual’s critical thinking skills are impeded, leading to a lack of good sense and judgment.

Bonhoeffer writes the following: “Upon closer observation, it becomes apparent that every strong upsurge of power in the public sphere, be it of a political or a religious nature, infects a large part of humankind with stupidity. The power of the one needs the stupidity of the other. The process at work here is not that particular human capacities, for instance, the intellect, suddenly atrophy or fail. Instead, it seems that under the overwhelming impact of rising power, humans are deprived of their inner independence and, more or less consciously, give up establishing an autonomous position toward the emerging circumstances. The fact that the stupid person is often stubborn must not blind us to the fact that he is not independent. In conversation with him, one virtually feels that one is dealing not at all with him as a person, but with slogans, catchwords, and the like that have taken possession of him. He is under a spell, blinded, misused, and abused in his very being. Having thus become a mindless tool, the stupid person will also be capable of any evil and at the same time incapable of seeing that it is evil. This is where the danger of diabolical misuse lurks, for it is this that can once and for all destroy human beings.”

As we read in our last article Stanley Milgram proved this with his experiments. Under the sway of tyrannical authority is a willful agency or willful stupidity. Dietrich Bonhoeffer found himself standing before a stampede of stupidity. Further, he writes, “It seems obvious that stupidity is less a psychological than a sociological problem. It is a particular form of the impact of historical circumstances on human beings, a psychological concomitant of certain external conditions.” What Dietrich Bonhoeffer experienced in Nazi Germany, we are experiencing on a global scale with the Covid-19 pandemic. How many amongst us have descended into willful stupidity? How many, although presented with the facts of the low mortality rate of Covid, insist that we are all going to die and that the unvaccinated are now a dangerous threat to our civilization? How many would gladly entertain the thought of establishing Covid camps and willfully run them at the behest of the “authorities?”

Bonhoeffer expands on his theory of stupidity when he writes, “Against stupidity we have no defense. Neither protests nor force can touch it. Reasoning is of no use. Facts that contradict personal prejudices can simply be disbelieved — indeed, the fool can counter by criticizing them, and if they are undeniable, they can just be pushed aside as trivial exceptions. So the fool, as distinct from the scoundrel, is completely self-satisfied. In fact, they can easily become dangerous, as it does not take much to make them aggressive. For that reason, greater caution is called for than with a malicious one. Never again will we try to persuade the stupid person with reasons, for it is senseless and dangerous.” How many of us have tried to reason with others regarding our vaccination status over the last year? Only to find those individuals becoming aggressive in their stance. How many when presented with the facts of how this pandemic is being used for more and more totalitarian control counter by criticizing these facts and then brushing them aside as trivial? Notice what Bonhoeffer advises. He says never again will we try to persuade the stupid person with reasons because it is senseless and dangerous. We must heed the words of Dietrich Bonhoeffer when he writes, “We must abandon all attempts to convince the stupid person.”

It is evident that attempts to convince the stupid reduce the effectiveness of any resistance. Throughout Nazi Germany there were networks of individuals working against the totalitarian regime of Hitler, whether they were formulating attempts to assassinate Hitler or working underground to save the Jews and each other. There was no time for folly, and more importantly, the stupid are more of a danger and a threat to those around them. In our present delusion of Covid 19, those who will not comply understand the totalitarian nature of what is unfolding and must find others who think the same to begin the groundswell of resistance. It is important to remember that iron sharpens iron for this battle. We indeed must abandon all attempts to convince the stupid person.

All totalitarian regimes will fail. Dietrich Bonhoeffer found himself in the Flossenburg Concentration Camp. On April 9th, 1945, he was executed. The camp doctor was H. Fischer-Hullstrung, who gave an account of Bonhoeffer’s last minutes, “I was most deeply moved by the way this most lovable man prayed, so devout and so certain that God heard his prayer. At the place of execution, he again said a short prayer and then climbed the steps of the gallows, brave and composed. His death ensued after a few seconds. In the almost fifty years that I worked as a doctor, I have hardly ever seen a man die so entirely submissive to the will of God.” Eric Metaxas writes in his book Bonhoeffer: Pastor, Martyr, Prophet, Spy “the crematorium at Flossenburg was not working, so the bodies of the men hanged that morning were burned in piles, and in this too, he had the honor to be joined to the millions of other victims of the Third Reich.” Two weeks later, on April 23rd, 1945, the Allied forces marched into Flossenburg to liberate the camp. Within another week, Hitler would commit suicide in his bunker. Germany was in ruins. Bonhoeffer, as well as countless men, women, children, and many who were Jews, had perished from the collective madness and stupidity of a crowd spellbound by Hitler and his diabolical Third Reich.

History is there to learn from and teach us not to repeat the travesties that came before us. The parallels to Nazi Germany are evident in today’s world. We must learn from those like Dietrich Bonhoeffer to gird our hearts, minds and spirits and come together in fellowship to resist and not comply. Bonhoeffer gives us hope when he writes, “The word of the Bible that the ‘fear of God is the beginning of wisdom’ declares that the internal liberation of human beings to live the responsible life before God is the only genuine way to overcome stupidity. But these thoughts about stupidity also offer consolation in that they utterly forbid us to consider the majority of people to be stupid in every circumstance. It really will depend on whether those in power expect more from peoples’ stupidity than from their inner independence and wisdom.” We, too, will find ourselves in the pages of history books, and this alone demands responsibility on our part.

For now, we are in the season of Advent as we anticipate the Celebration of Christmas. “And suddenly there was with the angel a multitude of the heavenly host praising God and saying, “Glory to God in the highest, and on earth goodwill, peace toward men.” Dietrich Bonhoeffer sits in prison during this season and writes, “A prison cell, in which one waits, hopes—and is completely dependent on the fact that the door of freedom has to be opened from the outside, is not a bad picture of Advent.” God is in the manger, wrapped in the swaddling of humility, the gentle and lowly King who would set the prisoners of this world free when He opened the door to heaven. Before his execution, Dietrich Bonhoeffer’s last words were, “This is the end—for me, the beginning of life.”

Friends, it is the end of 2021 and we are so busy doing our mission that we haven’t had the time to tell you everything we do. However, we trust you have been following our work stopping the Reproductive Freedom Act. AKA the Freedom to Kill Act, a bill that would subsidize human sex traffickers who currently have to pay for the abortions on their sex slaves. But if the bill becomes law, all NJ taxpayers will be paying for all abortions, including up to the moment of birth.

This is just the tip of the iceberg.

Join us as we work to expose the threats to our children and families and confront legislators and bureaucrats about the harm their policies are to the citizens of the Garden State.

Your gift of any amount is tax-deductible.

Thank you for your generous donation!