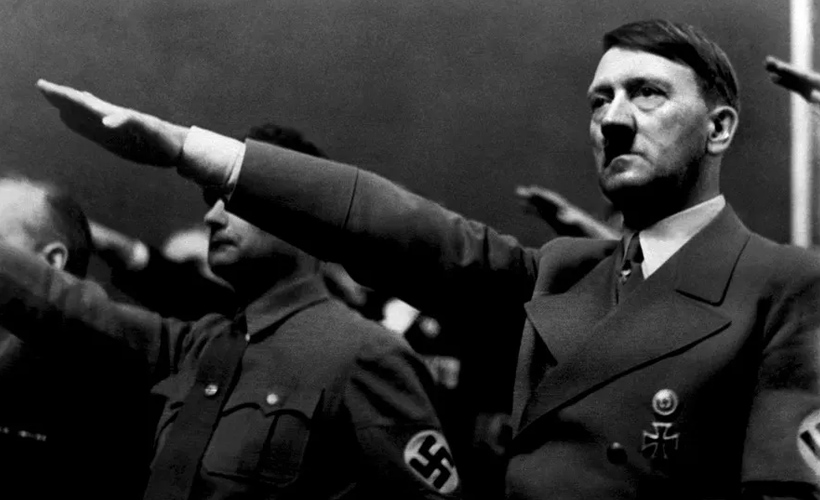 The gas chambers of Auschwitz were the ultimate consequence of the theory that man is nothing but the product of heredity and environment – or as the Nazis liked to say, “Of blood and soil.” I’m absolutely convinced that the gas chambers of Auschwitz, Treblinka, and Maidanek were ultimately prepared not in some ministry or other of Berlin, but rather at the desks and in the lecture halls of nihilistic scientists and philosophers.
Viktor Frankl
Holocaust Survivor

The Center for Garden State Families would now like to demonstrate how America’s current state of affairs is beginning to look more and more like Nazi Germany. Germany was ripe for a dictator who would rise from the ashes of loss from the first World War and the Weimar Republic’s economic collapse. We all know the stories of hyperinflation in Germany, which directly resulted from the war reparations that needed to be paid after the war. As time went on, Germany was on the mend; however, the crash and subsequent depression of 1929 was the death blow that would usher in one of the worst figures in human history – Adolph Hitler.

Unlike other dictators who reach heights of control through bloodshed Adolph Hitler was embraced by the German people as a savior and one that would transform Germany into Global Dominance and usher in a superior race of Aryans. Before Hitler’s rise, Europe engaged in philosophical thought such as Nietzsche, who proclaimed that God was dead. It was Nietzsche who spoke of a superman and a superior race of people. His writings influenced Hitler and planted their satanic seeds in his mind. Worse, there was a rise in liberal theology, which would lead to further destruction, especially regarding the church in Germany. John Warwick Montgomery stated the following: “In the eighteenth century the Bible was killed by unwarranted destructive criticism, in the nineteenth century God was killed; and in the twentieth century inevitably man has been killed.” Montgomery also stated that “This generation is not accidental; each step logically follows from what has preceded it: the loss of the Bible leads to the loss of God, for in the Bible God is most clearly revealed; the loss of God leaves Man at the naked mercy of his fellows, where might makes right.”

As in Germany, the United States has its share of liberal theologians who go as far as questioning the Deity of Jesus Christ. In addition, our educational system is now being torn down and reimagined for a Global Communism that will lead to a level of destruction that will rival the fifty million souls killed in World War II. Like Nazi Germany, our legal system continues to be diluted and removed from the absolutes of God and the Bible. R. J. Rushdoony said the following regarding any legal system: “If the source of law is the individual, then the individual is the god of that system…if the source of law is our court, then the court is our god. If there is no higher law beyond man, then man is his own god. When you choose your authority, you choose your god, and when you look for your law, there is your god.” Few know that in Nazi Germany, religion was privatized, and God was separated from the Government, whereby not even natural law had any recognition or validity. As Hermann Goering, one of Hitler’s henchmen, stated, “The Law and the will of the Fuehrer are one.” The Nazis would proclaim, “Hitler is the Law!” On September 15th, 1935, The Nuremberg Laws stipulated that the Jews were no longer German citizens. This law would eventually lead to thirteen additional regulations that would outlaw them, completely deeming them sub-human. It is interesting that in 1973 the United States also used the legal system to deem the unborn sub-human and removed from them any rights or citizenship as a matter of choice by abortion. America has its own Holocaust to contend with, totaling over 65 million dead babies.

What is even more startling is how Hitler used the church and the cross of Christ to facilitate his goals of domination. What few know is that Hitler was steeped in the occult, as were many of those around him. Few know that the Swastika is also known as the broken cross. It is a twisted perversion of the Cross of Christ to perpetuate a paganistic agenda. This Swastika was used by Guido von List, who wanted to build a temple to the German god Wotan. Hitler greatly admired List. In addition, the Swastika is a pagan symbol found in Hindu and Buddhist relics. In Mein Kampf, Hitler wrote of the Swastika the following: “A symbol it really is! In red we see the social idea of the movement; in white the nationalistic idea, in the Swastika the mission of the struggle for the victory of the Aryan man.” Hitler’s ultimate goal was to have the Swastika replace the Cross of Christ. Dietrich Eckart, one of the seven founders of the Nazi party and committed Satanist, said on his deathbed in 1923 regarding Hitler the following: “Follow Hitler! He will dance, but it is I who have called the tune! I have initiated him into the ‘Secret Doctrine,’ opened his centers in vision, and given him the means to communicate with the Powers. Do not mourn for me: I shall have influenced history more than any other German.” After Eckart had died, Karl Haushofer became Hitler’s spiritual mentor taking him to the pits of hell with occult transformation, which included being sexually transformed. Hitler became a sadomasochist who was stimulated by sexual violence and perversions of all forms. What began to unfold was a Messiah complex of the most wicked of conditions seen in human history. It has been recorded that Hitler would display a whip and say, “in driving out the Jews, I remind myself of Jesus in the temple.” Hitler also perverted the notion of the elect in the Bible by stating to his followers that “Whoever proclaims his allegiance to me is by this very proclamation and the manner in which it is made, one of the chosen.”

To make matters far worse, Hitler, although mesmerized with occultism and meditation, began to lose patience with it and wanted to accelerate his “powers.” At this time, he befriended Earnest Pretzsche, a used book dealer who introduced him to psychedelic drugs. These drugs would lead to clairvoyant visions expanding his “spiritual perceptions.” Hitler also believed in reincarnation and, on many occasions, espoused that he was the reincarnation of Tiberius of Rome. As if this is all not bad enough, historian Samuel Igra stated that Hitler’s brown shirts began as an exclusive homosexual and bisexual organization. Even Hitler’s personal secretary Rudolph Hess was a bisexual known in homosexual circles as “Fraulein Anna.” What few know is that Hitler’s inner circle and the SS were rampant with homosexuality. Even boys from the Hitler youth were rounded up to participate in sexual orgies.

It is all too evident that when the Cross of Christ is twisted, it becomes like the Nazi symbol – the Broken Cross. In the United States, we see an infiltration of the New Age movement and occultism, including television shows about the paranormal. We see meditation as a way of finding truth and meditation rooms in schools. We are witnessing our legal system removed from the absolutes of God and His natural laws. We are seeing our educational system usurped by the State and parental rights removed making our children the possession of the State. We see homosexuality and its agenda infect all aspects of our society. We have abortion and perhaps the planned euthanasia of our elderly in nursing homes, all under the guise of Covid-19. When the church is weakened by liberal theology and submits itself to the culture’s cauldron, unrestrained tyranny unfolds. We are witnessing this very thing happening before our eyes.

As a result of Covid-19, our schools have been closed with a planned reopening in the fall. The curriculum has been radically changed, and the State may forever indoctrinate and propagandize our children’s minds. As in Nazi Germany, Hitler’s central goal was to take over the entire educational system. Hitler believed whoever controlled the children controlled the future. The Center for Garden State Families will now begin to expose our educational system and the horrors that are penetrating the minds of our children. Reminiscent of the words of Viktor Frankl, the atrocities that we see in our history come from lecture halls removed from God, who is the only one who can restrain any such evil.

The Youth of today is ever the people of tomorrow. For this reason, we have set before ourselves the task of inoculating our youth with the spirit of this community of the people at a very early age, at an age when human beings are still unperverted and therefore unspoiled. This Reich stands, and it is building itself up for the future upon its youth. And this new Reich will give its youth to no one, but will itself take youth and give to youth its own education and its own upbringing.
Adolph Hitler
Sign in Create an Account
Lost your password?