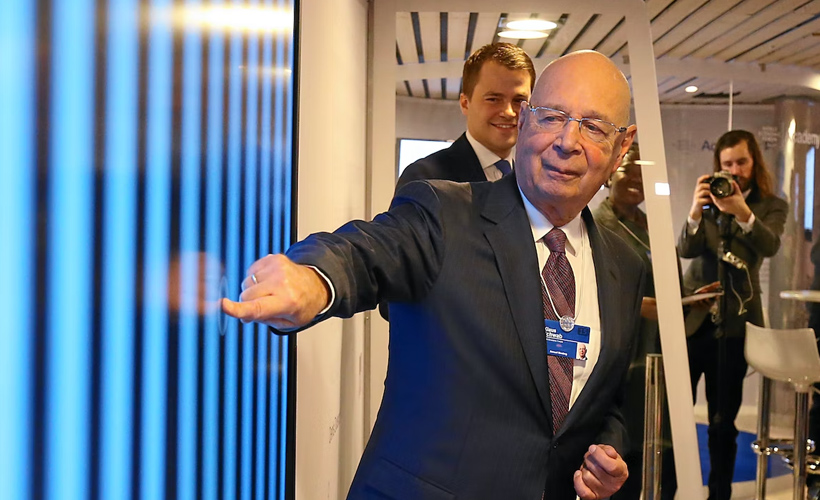 “For what will it profit a man if he gains the whole world, and loses his own soul?”

The Center for Garden State Families would like to continue our series on worldview by discussing Klaus Schwab, who we consider to be the world’s most dangerous man. Before we begin, it is essential to note that an individual is not born with a worldview. Our worldview is shaped by a multitude of factors that ultimately form our identity. The factors which shape our worldview over time include faith, family, friends, community, education, cultural and societal peer pressures, and the life circumstances and historical events that we have lived. Many of us can tell stories about how our grandparents went through the depression and World War II. These events greatly impacted their lives as well as their worldview.

For this article, we would like to take our readers back to the year 1938 in Nazi Germany. This year saw a Fascist Dictator named Adolph Hitler rise to power. The year 1938 saw the following events unfold. Hitler abolishes the war ministry giving him direct control over the German military. German troops occupy Austria, followed by the annexation of Austria by Germany. There was the invasion of Czechoslovakia, the expulsion of 12,000 Polish Jews living there. In addition, 17,000 Polish Jews living in Germany were deported to Poland, and thus the began the Holocaust on November 9th with Kristallnacht, also known as the night of broken glass. The all-night affair saw Nazi activists loot and burn businesses resulting in 7,500 Jewish businesses destroyed, 267 Synagogues burned, 91 Jews killed, and at least 25,000 Jewish men arrested. The year 1938 was the spark that lit the raging fires of World War II. This era is considered to be one of the most horrific periods of the 20th Century. This singular point in time scarred the lives and worldview of many who were part of this historical moment. It is important to understand this period because Klaus Schwab was born on March 30th, 1938, in Ravensburg, Germany. Very little is known about his childhood. The only available information is that his father was a businessman who went over the border to Switzerland, leaving him and his mother alone in war-torn Germany. A young Klaus Schwab grew up and was influenced by these events, especially the notion of borders, destruction, and death. On the other end of the spectrum were Adolph Hitler’s aspirations in his desire to take over the world, ushering in the Third Reich that would reign for one thousand years. As Klaus Schwab grew, he lived in a country that used a police state built on fear and violence, brown shirts and operatives, surveillance, brainwashing and control, propaganda and lies, the merger of government and businesses, eugenics, dehumanization, and a focus on hygiene.

Today Klaus Schwab heads up the World Economic Forum and is the Great Reset’s driving force. Our next article will delve into the Great Reset or aptly stated the Blitzkrieg of the 21st Century. For this article, we need to explore Klaus Schwab’s mind to see if we can draw parallels in his thinking to the events that shaped his life in Nazi Germany.

Klaus Schwab wrote many books, including his latest book published in 2020 called Covid 19: The Great Reset. We would now like to delve into some of his thinking, which spans many years of his career. To begin, Mr. Schwab seems to be fascinated with transhumanism, where he sees a merger of humans and machines whereby in his own words, will be “curious mixes of digital and analog life.” He delights in “sensors, memory switches and circuits that can be encoded in common human gut bacteria” and that “Smart Dust, arrays of full computers with antennas, each much smaller than a grain of sand, can now organize themselves inside the body” and that “implanted devices will likely also help to communicate thoughts normally expressed verbally through a built-in smartphone, and potentially unexpressed thoughts or mood by reading brain waves and other signals.” With these ideas, one cannot help but think of Joseph Mengele, also known as the Angel of Death, who conducted medical experiments on the Jews in concentration camps.

Also, Mr. Schwab gleefully states “that it is now far easier to manipulate with precision the human genome within viable embryos means that we are likely to see the advent of designer babies in the future who possess particular traits or who are resistant to specific diseases.” Adolph Hitler would be proud of Mr. Schwab’s quest for a Master Race of people. As if this is not alarming enough, Mr. Schwab is now using the pandemic to promote his personal version of hygiene. According to Mr. Schwab, “the pandemic will certainly heighten our focus on hygiene. A new obsession with cleanliness will particularly entail the creation of new forms of packaging. We will be encouraged not to touch the products we buy. Simple pleasures like smelling a melon or squeezing a fruit will be frowned upon and may even become a thing of the past.”

To many, this may seem like the meanderings of an 82-year-old man with early-onset dementia. However, we would be remiss if we did not refer to Susan Bachrach, Ph.D. who wrote in the New England Journal of Medicine on July 29th, 2004 the following: “In democratic societies, the needs of public health sometimes require citizens to make sacrifices for the greater good, but in Nazi Germany, national or public health — Volksgesundheit — took complete precedence over individual health care. Physicians and medically trained academics, many of whom were proponents of “racial hygiene,” or eugenics, legitimized and helped to implement Nazi policies aiming to “cleanse” the German Society of people viewed as biologic threats to the nation’s health. Racial-hygiene measures began with the mass sterilization of the “genetically diseased” and ended with the near-annihilation of European Jewry.” Further Mr. Schwab states as it pertains to the Covid 19 Pandemic that “the next hurdle is the political challenge of vaccinating enough people worldwide (we are collectively as strong as the weakest link) with a high enough compliance rate despite the rise of anti-vaxxers.” The question here becomes who comprises the weakest link which is perhaps a veiled statement about the German idea of “racial hygiene” or eugenics.

Growing up in a Fascist state, Mr. Schwab writes the following “One of the greatest lessons of the past five centuries in Europe and America is this: acute crisis contribute to boosting the power of the state. It’s always been the case, and there is no reason why it should be different with the Covid-19 pandemic.” And what better way to do that than with youth activism. According to Mr. Schwab, “youth activism is increasing worldwide, being revolutionized by social media that increases mobilization to an extent that would have been impossible before it. It takes many different forms, ranging from non-institutionalized political participation to demonstrations and protests, and addresses issues as diverse as climate change, economic reforms, gender equality, and LGBTQ rights. The young generation is firmly at the vanguard of social change. There is little doubt that it will be the catalyst for change and a source of critical momentum for the Great Reset.” Here we see the use of digital brown shirts that are mobilized using social media, another mechanism of lies and propaganda, to usher in Mr. Klaus Schwab’s agenda.

As we can see, Mr. Schwab has been impacted by his childhood growing up under a totalitarian Fascist State. This significant event growing up in Fascist Germany has influenced his worldview, as we can see from his writings. Perhaps, the young Klaus admired Hitler’s ambitions for world domination since Mr. Schwab’s organization, the World Economic Forum, has global governance ambitions. Hitler was convinced that his Third Reich would last for a thousand years. Instead, it came crashing down, destroying Germany while Adolph Hitler committed suicide April 30th 1945 a mere 7 years later. Klaus Schwab’s World Economic Forum, with all its influential members, is our modern-day Third Reich. Like the one before it, this too shall fail, but we will experience maladjustments to the global economy on its way to failure. As believers, we must hold fast to the Word of God. We must heed the words of 1 Peter 1:13 (NKJV) “Therefore gird up the loins of your mind, be sober, and rest your hope fully upon the grace that is to be brought to you at the revelation of Jesus Christ.” It is time for every Christian to fasten our seat belts, roll up our sleeves, and prepare our minds for the coming spiritual exertion that is coming upon us. In our next article, we lay out what Mr. Klaus Schwab’s Great Reset plan means to the world.

Praise the Lord, all nations! Extol him, all peoples! For great is His steadfast love toward us, and the faithfulness of the Lord endures forever. Praise the Lord!