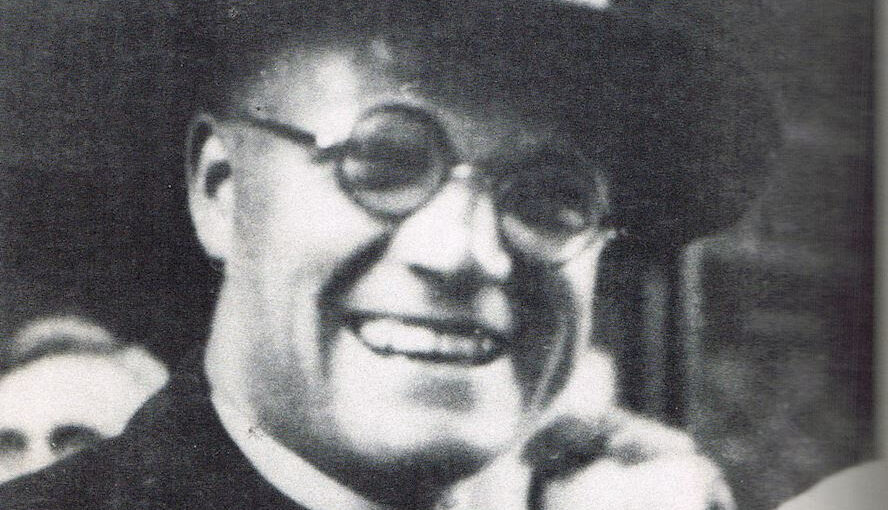 Jesus is the reason for the season.

The Advent of the Heart

“No life is unhistorical or beyond history. History is not the ultimate thing but the ultimate can be seen in the context of history.”

The Center for Garden State Families has chosen this Advent message from the title of the book called Alfred Delp Priest and Martyr – Advent of the Heart – Seasonal Sermons and Prison Writings. Alfred Delp (September 15, 1907 – February 2, 1945, executed by hanging) was a contemporary of Dietrich Bonhoeffer. Delp was a Jesuit Priest who, like Bonhoeffer, was part of the resistance movement against Adolf Hitler. His life was certainly not unhistorical or beyond history. Sadly, like our beloved Dietrich Bonhoeffer, he was executed before the allied forces would liberate him. As per Adolf Hitler’s wishes, his ashes would be scattered to the winds, never to be seen again. Yet, like Paul, his prison writings would survive. In history, he lives in our hearts and our minds. Like Alfred Delp and Dietrich Bonhoeffer, we see history before us, and the ultimate hand of God will be revealed in the context of the history we live.

From the book on Alfred Delp, we read, “On the first day in December 1944, as the allies were bombing Germany and its defeat was only five months away, a young Jesuit priest was enduring his fifth month of solitary confinement in Berlin. He was awaiting trial for treason for his opposition against Hitler’s government. Seated at a rough wooden table in his unheated prison cell. Alfred Delp awkwardly crossed one hand over the other to accommodate his handcuffs as he wrote the words, “More, and on a deeper level than before, we really know this time that all of life is Advent.”

Our world has witnessed a prolonged prison cell with the Covid 19 Pandemic. Families, friendships, and marriages have been torn apart due to the strain of this pandemic and, in many cases, vaccination status. Early in the pandemic, the elderly reached out their hands as if shackled to handcuffs to touch cold panes of glass from their assisted living prison camps, hoping to feel the warm touch of their loved ones before their passing. Funerals were put off, and celebrations of life were spent masked for fear of the premature death of the living. This world has become a war zone. An invader virus called the invisible enemy has seen brother rise against brother and nation rise against nation. Many of us have written articles and books as if our hands were crossed one over the other in a prison camp to accommodate the handcuffs of censorship and accusations of being labeled conspiracy theorists. Like Bonhoeffer and Delps before them, it came from the shackled brokenness of this world with the urging of the Holy Spirit on their hearts to write, and in so many ways, they were set free from this prison camp. Through them, the encouragement and fellowship of believers came together to help one another. We were lifted up. We were supported to do the work of the Lord despite the circumstances that fell upon us. The comforting words and aiding visits bring a feeling of peace to one another. We read in Matthew 16:18-19 (ESV) when Jesus says, “And I tell you, you are Peter, and on this rock I will build my church, and the gates of hell shall not prevail against it. I will give you the keys of the kingdom of heaven, and whatever you bind on earth shall be bound in heaven, and whatever you loose on earth shall be loosed in heaven.”  Through it all, the gates of hell did not prevail against those who submitted themselves to the Lord Jesus Christ, for there came to us a gentle and lowly King who rested in a manger. A child who was given to us to overcome this world.   These last several years have seen believers work for the Kingdom of God against the forces of China, the World Economic Forum, and those playing god to determine who lives and dies.

We turn once again to Alfred Delp, who writes from Tegel Prison, Berlin December 1944 with shackled hands, “Advent is a time of being deeply shaken, so that man will wake up to himself. The prerequisite for a fulfilled Advent is a renunciation of the arrogant gestures and tempering dreams with which, and in which, man is always deceiving himself. Thus he compels reality to use violence to bring him around, violence and much distress and suffering.”

Unlike Alfred Delp’s experience in Nazi Germany, the violence we have witnessed is that of the silent virus of global communism used to perpetuate the arrogant gestures and tempering dreams of Anthony Fauci, Klaus Schwab, and elite forces creating much distress and suffering through lockdowns and vaccine mandates which, as we know all too well are creating untold misery and suffering by those who have endured job loss, been injured and have died. It all started with a deceiving campaign of fear that paralyzed the thinking of many of those among us. Dietrich Bonhoeffer writes from the same Tegel prison during Advent:  “Human beings are dehumanized by fear. But they should not be afraid! That is the difference between human beings and the rest of creation, that in all hopelessness, uncertainty, and guilt, they know a hope, and this hope is:  Thy will be done. Yes. Thy will be done. We call the name of the One before whom the evil in us cringes, before whom fear and anxiety must themselves be afraid, before whom they shake and take flight; the name of the One who alone conquered fear, captured it and led it away in a victory parade, nailed it to the cross and banished it to nothingness; the name of the One who is the victory of death – Jesus Christ, the one who was crucified and lives. He alone is the Lord of fear; it knows him as its Lord and yields to him alone. Therefore, look to him in your fear. Think about him, place him before your eyes, and call him. Pray to him and believe that he is now with you and helps you. The fear will yield and fade, and you will become free through faith in the strong and living Savior Jesus Christ.”

Dear reader, a child was given to us to conquer all the fear and anxiety of this world. For this is our waiting. This is our Advent. Not living in fear but in the hope of being joined one day with our beloved Lord Jesus, who came to rescue us in the form of a child born to us.   The Harvest is great, and the workers are few who continue their work as occupiers waiting on the Lord Jesus Christ. Advent is not a season but a lifestyle of the heart for those who tirelessly work for the Lord Jesus Christ.

Now, we rest our hearts, reflect, and rejoice in this Advent season. We meditate on how God became a Child. As Dietrich Bonhoeffer reminds us from Tegel prison, “Mighty God (Isaiah 9:6) is this child’s name. The child in the manger is none other than God himself.   Nothing greater can be said:  God became a child. In the Jesus child of Mary lives the almighty God. Wait a minute! Don’t speak; stop thinking! Stand still before this statement! God became a child! Here he is, poor like us, miserable and helpless like us, a person of flesh and blood like us, our brother. And yet he is God; he is might. Where is the divinity, where is the might of a child? In the divine love in which he became like us. His poverty in the manger is his might. In the might of love he overcomes the chasm between God and humankind, he overcomes sin and death, he forgives sin and awakens from the dead. Kneel down before this miserable manger, before this child of poor people, and repeat in faith the stammering words of the prophet:  Mighty God! And he will be your God and your might.”

This world is a prison cell of sin for which a child came to rescue us. Those who serve Him sometimes seem to have their hands awkwardly crossed one hand over the other in silent anticipation of waiting to accommodate the handcuffs of this world.   Yet, God is in the manger. A Child who breaks the chains of those handcuffs and sets us free to do unto His Conquering Will. His enemies are His Footstool, and we are His obedient servants! No matter the circumstances, we must be in awe of the One who came for us. We must never forget the words of Alfred Delp, whose hands were shackled by handcuffs and who wrote, “More, and on a deeper level than before, we really know this time that all of life is Advent.”  O Come, O Come Emmanuel into the Advent of our Hearts and lives. May your impoverished and miserable manger heal the soul of America. Thy will be done!

“Are you a person

whose concerns are with God?

Are you a person of whom it can be said

that your heart and your mind are filled

with a peace that surpasses all comprehension?

Oh, that we could be such people again,

Intrinsically filled to the brim-

Not only with knowledge,

and wrestled-in reality and abundance

of our Lord God!

“For God alone my soul waits in silence,

for my hope is from Him.

He alone is my rock and my salvation,

my fortress; I shall not be shaken.

On God rests my deliverance and my honor;

my mighty rock, my refuge is in God.

Trust in Him at all times; O people;

pour out your heart before Him;

God is a refuge for us.